The 25th IAKS Congress proved highly successful in presenting pioneering projects focusing on global trends in sports and leisure facility construction. Over the four days of the Congress, 48 experts presented architectural and operational solutions for top athletic performance, health awareness and an active lifestyle. Some 400 participants from 39 countries attended presentations on various topics, including the increasing significance of the multifunctionality of exercise venues for lifestyle activities, a stronger focus on universal design suitable for the disabled in line with ageing society, and the obligation towards sustainable construction for the achievement of climate protection goals.

The event established many lasting connections, presented new ideas and created exciting perspectives for the entire sports facility industry. For your personal follow-up or if you have missed any session you are interested in, you may enjoy the retroperspective. The summing-up starts with day 1. 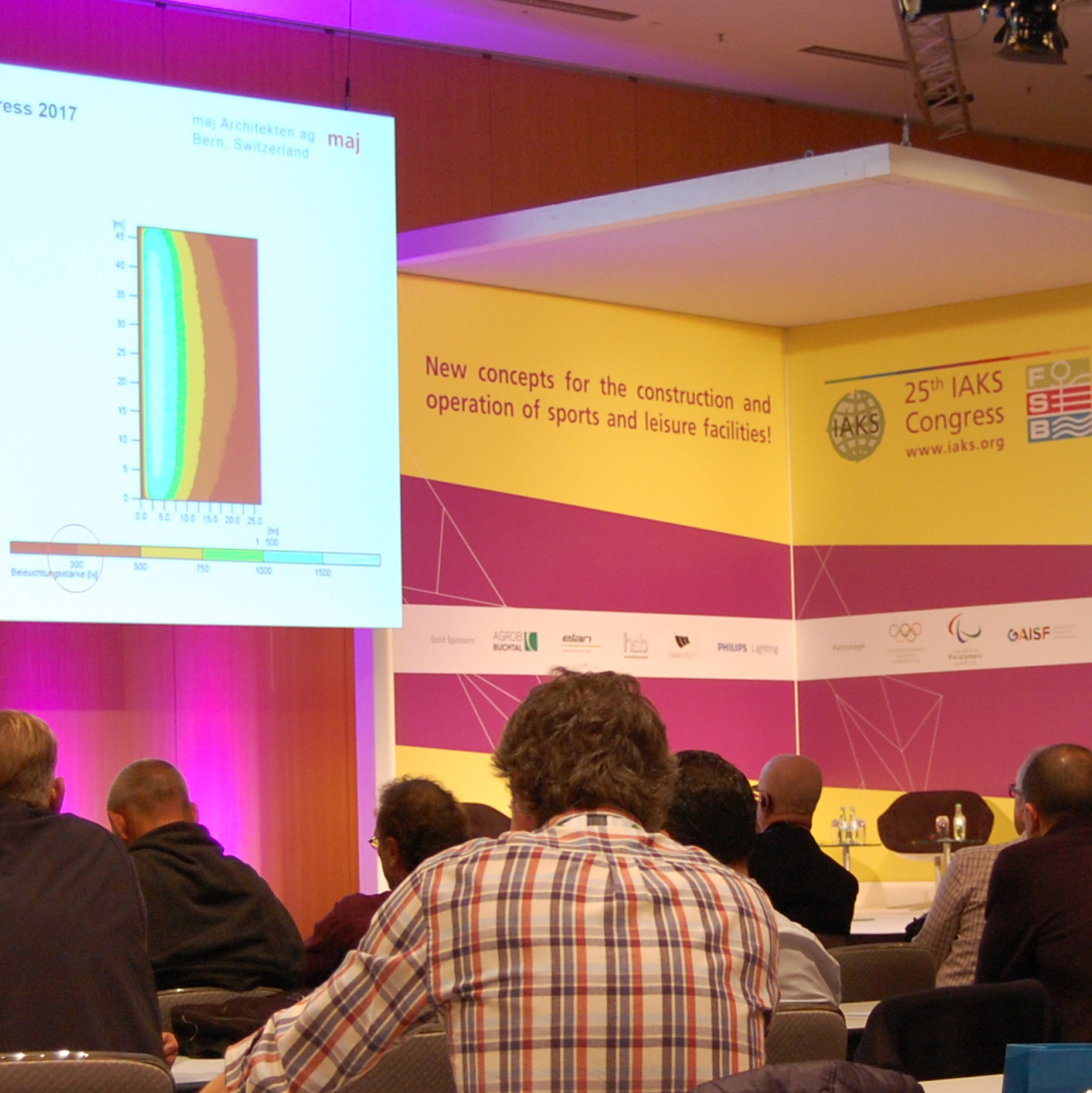 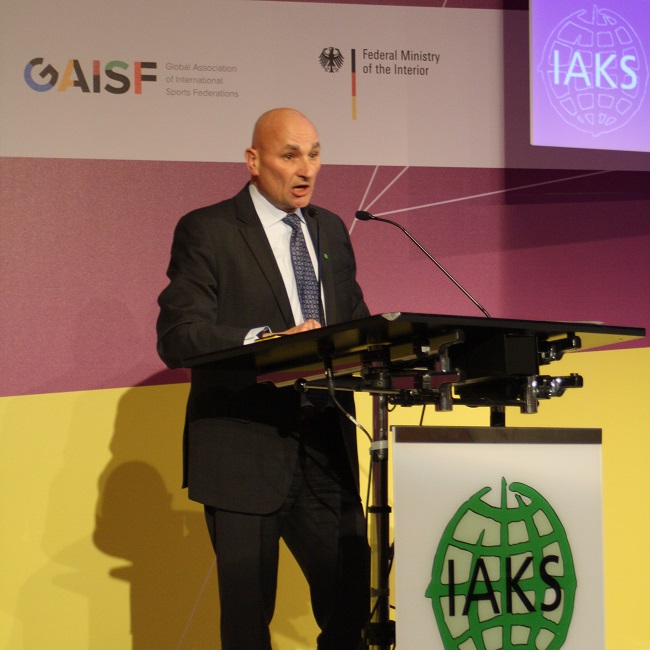 Chaired by Gilbert Felli, Senior Advisor to the IOC, the first congress session opened with how to achieve successful partnership with a focus on legacy, the Queen Elizabeth Olympic Park as a successful example of legacy operations, and long-term sustainability achieved with operating legacy.

Ron Bidulka, Managing Director of PricewaterhouseCoopers in Canada, gave the first presentation on Developing a Critical and Realistic Partnering Game Plan. He introduced a four-step model of successful partnership: vision, legacy, event strategy and finally the partnership strategy. Emphasising how important a vision for legacy is, Ron highlighted four exemplary examples of successful partnerships and therefore of prospering legacy.

Simon Cooper, Head of Sport Unit of the Greater London Authority, talked about working in a successful partnership during and after the London Olympic Games 2012. Regeneration of the entire community was the keyword for the Games in 2012. For sustainability reasons, the Queen Elizabeth Olympic Park is providing a home to business, research and shopping facilities. London managed to combine social and financial benefits as well as a major sports event and grassroots sport. Legacy is as important as the bidding process and the delivery of the Games themselves.

Brad Mayne is the President and CEO of the International Association of Venue Managers (IAVM). His motto is long-term sustainability with operating legacy. He underlined that a facility needs to be adaptable to different possible long-term tenants to enable the exploitation of the highest potential. In addition to the purpose of sport, future facilities need to offer opportunities for social and other cultural events and should respect such factors as transport, accessibility, safety and security.

The session was moderated by Daniel Cordey, chairman of the Association of Global Event Suppliers (AGES) in Switzerland, which co-presented this session on temporary and modular structures.

Bernd Helmstadt, Sales Director of the Nüssli Group, presented the temporary ice hockey arena in Lausanne, which needed to be converted for future uses. The initial layout had to be altered to meet the new demands of the club, fans and the hockey league. The club as a client focused not only on the sport itself, but also on spectator facilities and the dehumidification system. Within a year, the architects managed to plan and execute the alterations.

Andy Mytom, partner at David Morley Architects, talked about the Water Polo Venue for London 2012, recent silver medallist of the 2017 IOC IAKS architecture prizes. Impressively, he showed how material was recycled for the construction of the temporary venue and how natural ventilation was implemented in the public stand. After the Games, around 90 per cent of the material was reused. According to Andy, the interior and exterior of the facility both have to suit the event and respect the needs of athletes and fans.

Frans von Roessel, Sales Manager of Neptunus, talked about the demountable judo hall in Arnhem, Netherlands. The hall has a temporary structure and can be dismantled and re-built elsewhere if necessary. The judo hall was built within three months but with a special focus on functionality, adaptability and aesthetics. The system used is modular, sustainable and energy-saving.

Stéphanie Commandeur and Manuel Laborie, both responsible for Business Development at GL Events, reported on modular sports venues with reference to the rugby stadium in La Rochelle as a showcase. The stadium was built within three months between the seasons. The modular system makes it possible to adapt to the demands and needs of stakeholders, and especially those of the club with its changing sporting performance, financial situation and requirements due to changing leagues. The solution is highly cost-effective thanks to the low cost of construction and high revenue for the operator. 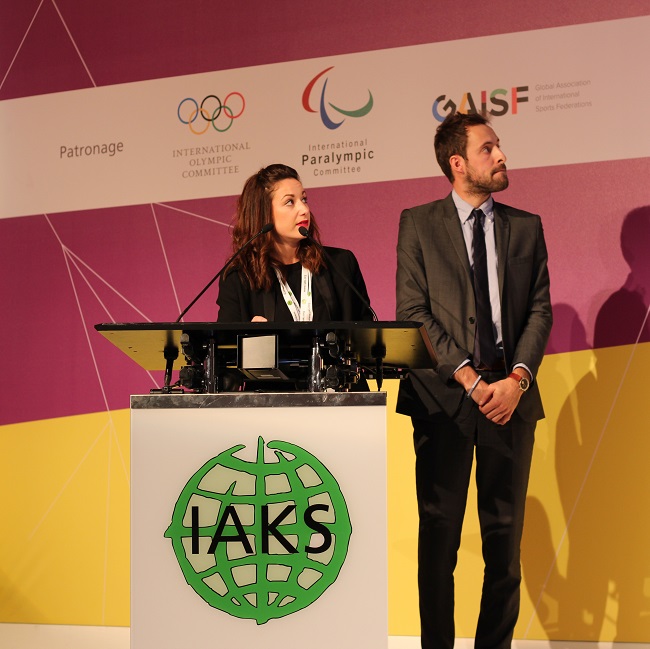 This workshop focused on the challenges facing operators of professional and semi-professional venues as they strive to make their facilities socially, environmentally and financially sustainable and add to the vibrancy of their region and market.

It was moderated by John Sheehan, editor of the PanStadia & Arena Management magazine, who reminded his audience of the importance of safety and security at and around the venue.

First, Marcin Wojczynski, Head of Business Development at SMG Worldwide Entertainment & Convention Venue Management in Poland, spoke about the daily challenges concomitant with operating sports venues. Pointing out differences in culture, multi-functionality and security, he introduced the Wrocław stadium for the UEFA EURO 2012, where those challenges were successfully addressed. This example of best practice is multi-functional and responds to the complexity within the customer market.

President and CEO of the International Association of Venue Managers (IAVM) Brad Mayne has been involved in planning prestigious venues for Olympic Games, World Cups and the Super Bowl. He passed on valuable knowledge from his experience regarding the operating legacy. The success of the venue’s legacy relies upon a satisfying guest experience, a thought-through safety and security strategy, and a flexible business plan to allow organisers other than the sports event industry to generate revenue. 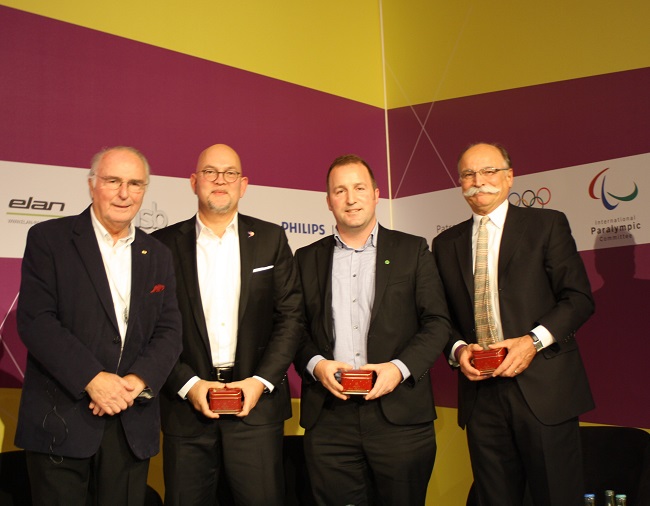 The first congress day was rounded off with presentations on stadiums and arenas as catalysts for healthy urban development.

Moderated by Prof Geraint John, Senior Advisor at Populous, it was discussed whether major sports and entertainment venues are integrated effectively into the overall urban landscape, help to stimulate new shops, hotels, housing and commercial facilities, and are well served by infrastructure.

Robert J. Fatovic, Vice President at CannonDesign, presented TD Place at Lansdowne Park in Canada, a 2017 IAKS IOC IPC Architecture Prizes medallist. The old stadium and its surrounding venerable area had to be modernised, while at the same time respecting both the heritage and history with its adaptive reuse as an urban destination. CannonDesign shifted away from the idea of a stadium as an inert building and instead promoted the connection of stadium and public space.

Executive Vice President at AECOM Bill Hanway gave insights into the Games masterplans for London 2012 and Rio 2016, adding a look ahead to the 2028 Games in Los Angeles. While London had been doing a great job in changing to legacy mode, Rio still seems to be struggling with implementing important steps to comply with the elaborated post-Games strategy. The objective of LA 2028 is to ensure financial stability for the Olympic Movement with privately funded Games.

The session was brought to a conclusion with a presentation on the new Tottenham Hotspur Stadium in London by Senior Principal at Populous Tom Jones. The stadium will make the suburb a hub for business, cultural events and education. By incorporating current technology pushed to the extreme and at the same time serving spectators just as 2,000 years ago in the Roman arenas, the Hotspur Stadium will allow people to experience athletic feats in a realm exceeding the highest quality and safety standards 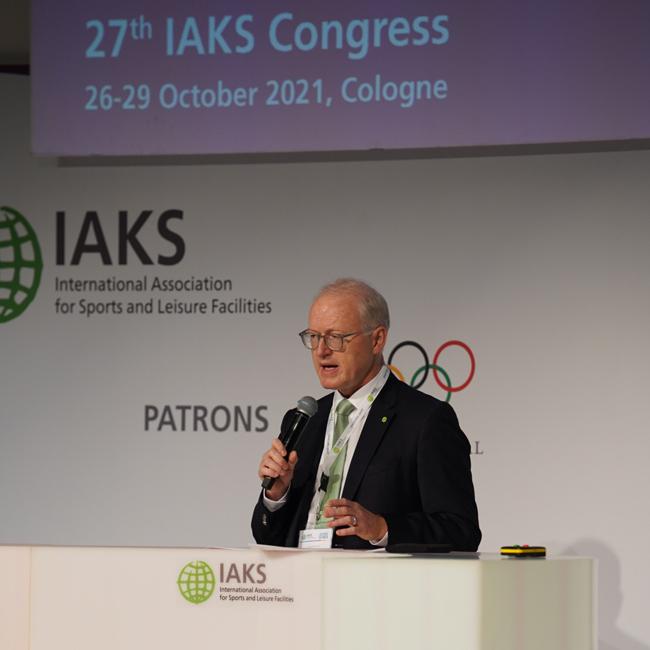 The 28th international IAKS Congress will take place from 24 to 27 October 2023 in Cologne, Germany. We're looking forward to your ideas for presentations or round table discussions as part of the congress programme. 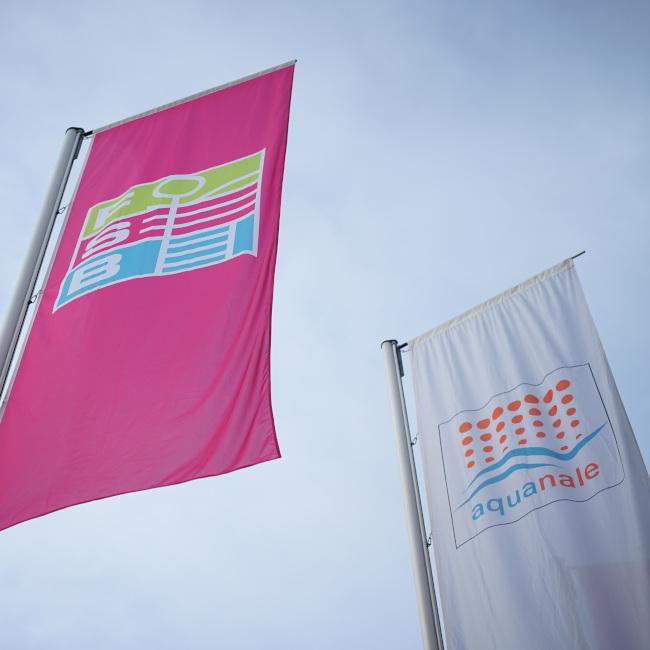 FSB 2023: Preparations are forging ahead

Ten months before the opening of the sector’s leading trade fair, the organisers are already reporting a high level of registrations, including many companies that were unable to participate in 2021 due to the pandemic. The early-bird discount for FSB is available until 31 January 2023. 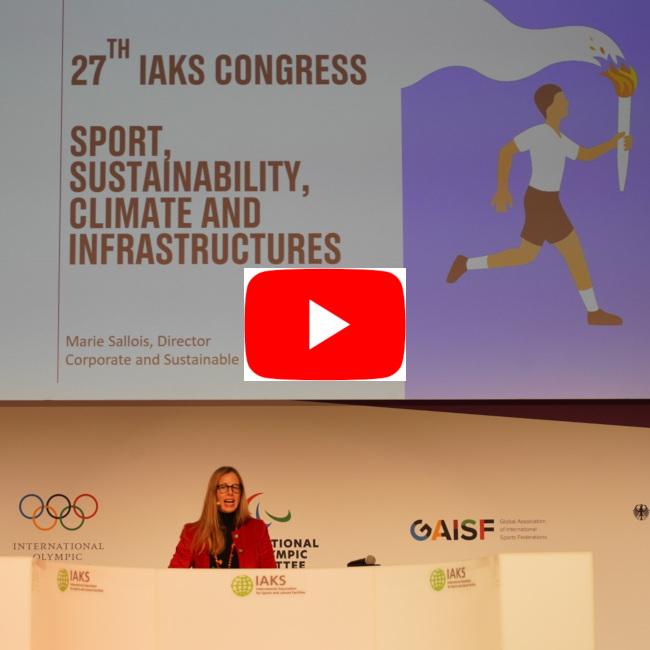 This year’s congress programme was rich and intense. The presentations have been recorded and are now available as webcasts free of charge for congress delegates and IAKS members. Did you miss a session or want to review the learnings? Please reach out to the IAKS office to ask for the login password. 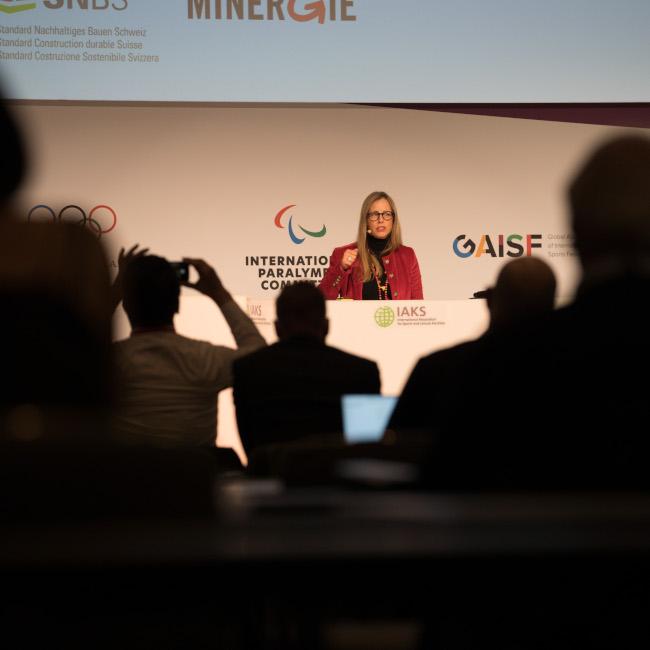 Four days of brain food with high-calibre speakers and inspiring interventions: Over 340 guests and delegations from 34 countries, plus an additional 85 unique users who accessed the event online, took part in the 27th edition of the IAKS Congress, allowing delegates from all over the world to find out about how to develop healthy and sustainable communities. 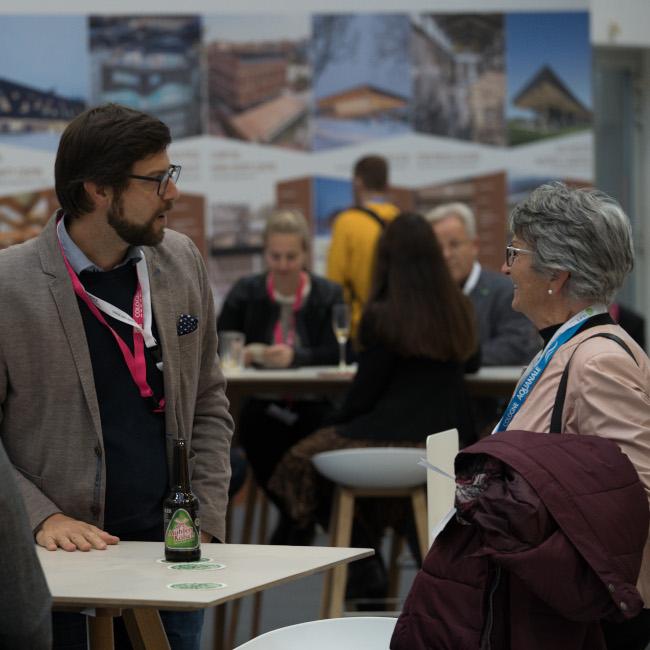 The IAKS Congress picture gallery gives an impression of the inspiring conversations, energy, ideas and inspiration at the 2021 Congress. Here is what our congress delegates and panellists say: "Certainly, my takeaways from the week will allow me to shape our strategic company direction and the future product development initiatives within our business." (Andrew McRae, CEO, Athletica Sport Systems‎)

aquanale and FSB 2021: Successful restart of the industry platforms

The two leading international events were able to provide the momentum that all trade fair participants had been hoping for to support the industry’s successful development. More than 16,000 trade visitors from 103 countries attended to find out about the range of products and services offered by the 466 exhibiting companies from 45 countries.
All news All events